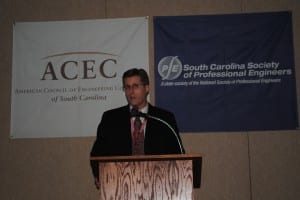 Timothy W. Rickborn, PE, Chairman of the SC State Board of Registration for Professional Engineers and Surveyors led the keynote presentation at the 2014 ACEC-SC/SCSPE Winter Meeting Feb. 26, 2014.

He was appointed by Gov. Haley to the SC State Board of Registration for Professional Engineers and Surveyors in 2012 and serves until 2016.

He is a licensed Professional Engineer in 5 states. He has also received structural engineering certification from the Structural Engineers Certification Board (SECB).

Rickborn has been actively engaged in the practice of engineering for the past twenty-one years with sixteen of those years as a Professional Engineer in responsible charge of numerous types of projects including residential, commercial, and industrial and bridge projects.

As an active and founding member of the Structural Engineers Association of South Carolina, Rickborn has held numerous positions within the organization.

He has been actively involved in community affairs as a former Board Member and Treasurer of the Charleston County Clemson Club and the former Vice-President of the East Cooper Branch of Lutheran Brotherhood. Rickborn received the Young Alumnus of Merit Award from the Clemson University Alumni Association.